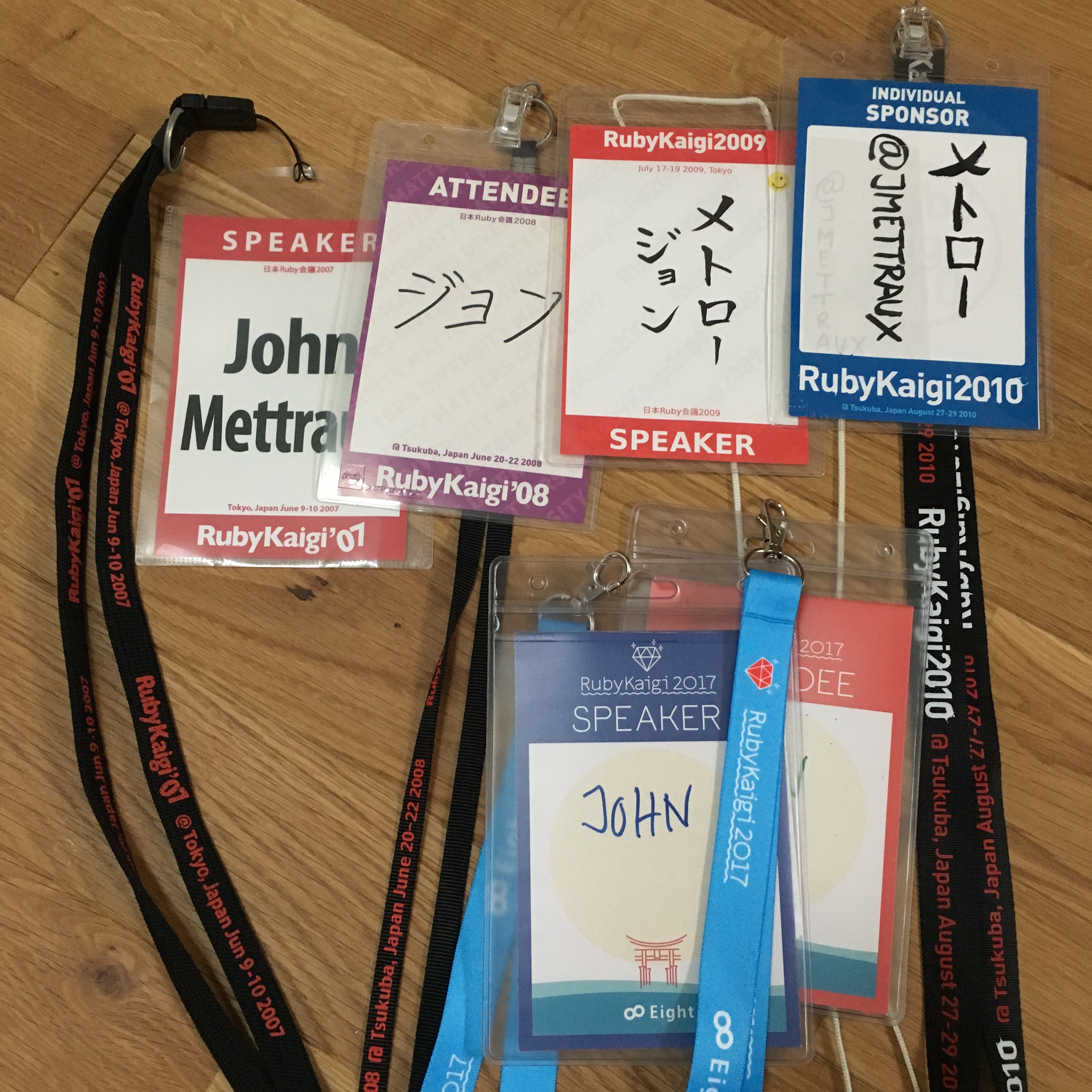 The RubyKaigi Circus came in our good town of Hiroshima for its 2017 edition last week.

I was lucky enough to be a speaker, although, initially, I merely wanted to be a helper.

My first RubyKaigi was the 2007 edition. Time flies.

The RubyKaigi team came to visit Hiroshima around March. They especially visited the International Conference Center. It is very affordable compared to similar offers in the Greater Tokyo.

They contacted the local Hiroshima Ruby people and requested for 3 to 4 local organizers, to support them in everything Hiroshima. Thus, Himura-san, Takata-san, Kitadai-san and Nishimoto-san were chosen.

At that point I realized that our local Ruby community was languishing and, with the benediction of our benevolent leader Himura-san, I rebooted Hiroshima.rb, we're since trying to meet every month for a Lightning Talk gathering. We had a break around the RubyKaigi, but we start again in October.

A few weeks before the conference, the helper staff was recruited, most of the Hiroshima Rubyists got in as well as students from the local tech university. From Tokyo, I was happy to see Paul "Doorkeeper" McMahon, I hadn't met him for 7 years I think. I'm happy to see that Doorkeeper is striving (and used for ticketing the RubyKaigi itself). Paul, thanks for coaching Adam on his first RubyKaigi!

The day before the Kaigi a typhoon swept across the islands but, as usual, there was no direct hit on Hiroshima, it passed south. The conference days, right after the storm were thus beautiful.

navigating through the talks

Since I was talking right before the lightning talks on Tuesday afternoon, I spent the first days half-listening, half-preparing my own talk.

I favoured the underdog talks (there weren't many of them), that drove me towards the Cosmos room and sometimes the Dahlia room.

The honours of the Keynote went to Nobu-san. I remember meeting him 10 years ago. He had told me he is from the Tochigi prefecture that had made me dream about Nikko and the frozen valleys I had visited there the previous winter. The RubyKaigi team assured us that it was one of his first time to speak in public, he did well!

The next talk on my list was Mapping your world with Ruby, about SafeCast, an invaluable system in our Fukushima days.

The Gemification for Ruby 2.5/3.0 was very interesting. In reverse, sometimes I'd love to have Concurrent-Ruby integrated in the standard library, but that's not my business.

Spring is gone, but it was still time for Hanami. I said hi to the speaker and got my sticker, I will give it to daughter #1.

The Goby talk was nice. Ruby certainly is an inspiration for many languages, we need to update the genealogy tree. Kudos to Stan.

I skipped the "Ruby committers vs the World". I also skipped next day's keynote.

My second day started with @yhara-san's talk about Ruby, Opal and WebAssembly. The presentation featured two or three in-browser demos and the slides were fun to follow.

I then attended What visually impaired programmers are thinking about Ruby? by local organizer Nishimoto-san. His conclusion indicated that Ruby fares not that bad. He took us in a world of braille terminals and screen-reading tools. Text is king, visual programming must be quite out of question. My eyes get hammered every day, I might become an old programmer that is visually impaired and that is making me think.

Asynchronous and Non-Blocking IO with JRuby was a solid talk. The glimpses shared about the working of the JRuby team were very interesting.

The next Cosmos talk, Food, wine and machine-learning, filled the room. I got mislead by the "teaching a bot to taste" subtitle, it was rather "teaching a bot to match food and wine". Tasting wine is so subjective, friends make the wine great.

It was then time for my talk, see below.

The lighting talks were wonderful. I have to say that I dream of a Regional RubyKaigi made up only of lightning talks, delivered quickly in Japanese or English or plain Ruby, punctuated by espressi.

The next morning, I had to release a piece of software for a customer and couldn't attend to the first volley of presentations.

The talk by Tagamori-san, Ruby for distributed storage system, was exciting. I like what Treasure Data is doing and I especially follow digdag among all their tools.

There was then a heavy legacy redux talk: Ruby parser in IRB 20th anniversary. Itoyonagi-san seems to have done a bit of that work in an alpine shack near the top of a Swiss mountain. I forgot to ask which one :-(

What I like about the next presentation I attended to is its demonstration of a combo that, I think, works wonders: the Ruby guy and the Business guys. I am not thinking technical co-founder and business co-founder, I'm simply thinking about the business team/line and its weaponsmith. Ruby unceremouniously and concisely involved in the tools to achieve business goals. Ruby in office time reboot.

I then had to leave the RubyKaigi to go and welcome my parents who were visiting for two weeks.

All the talks and presentation materials are available directly from the RubyKaigi 2017 Schedule. That'll let me catch up on what I missed and what I misunderstood.

Right before the Lightning Talks, I gave my flor talk. The video is on the right.

The Cosmos room was packed for the previous talk and most of the people left after it ended.

I could have talked about rufus-scheduler but I think there's nothing interesting in a long history of maintenance and slow rework. It's used here and there, the star count goes up, people complain, I fix things the best I can.

The only thing I could talk with some passion is flor and my hubristic quest for a workflow tool that'd made sense to me. I decided to have some 20% of my time spent in "flosh", the flor shell, to show the operating system nature of flor and that went OK.

I had asked Nyoho-san to present me. Generally RubyKaigi organizers were presenting the speakers but sometimes non-staff people did the presentations. I wanted to have an organizer and especially a local organizer doing the introduction. Ishibashi-san lent his Carp cap to Nyoho-san for him to deliver his introduction flawlessly. Unfortunately Nyoho-san doesn't appear on the video.

Flor is an interpreter for a funny language that is somehow Lisp-like. It's slow, but fast enough, especially when driving human's work flows. I try to build it as an operating system for business processes.

I was torn between "hey, it's a RubyKaigi, you have to talk about something tightly Ruby-related" and "whatever, it's Ruby-related and I'm passionate about it". Not sure if the passion helped. I think I missed the chance to show that Ruby is great for concisely implementing the tasks that make up a business process, and that flor is merely tapping into that greatness.

I am still nostalgic for flon, the C prototype to flor. Tiny servers driving business processes among shellish taskers.

There was one gentleman in the crowd with a Carp cap and t-shirt, I wanted to thank him for flying the local colours but I got diverted by questions.

I was happy delivering this speech. I hope it wasn't too boring. It motivates me anyway to go on developing flor.